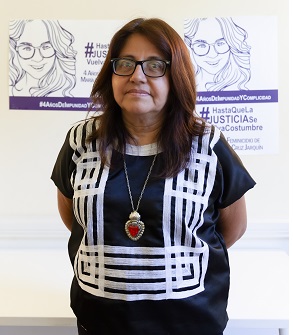 At the proposal of GAMAG EUROPE, it supports the journalist Soledad Jarquín Edgar, who has claimed in the European continent the justice that is denied to her in Mexico

The Global Alliance on Media And Gender (GAMAG), at the proposal of its Regional Chapter GAMAG EUROPE, supports the Mexican journalist Soledad Jarquín Edgar, who has demanded in Europe the justice that is denied to her in Mexico, to clarify the femicide of her daughter, photojournalist María del Sol Cruz Jarquín.

Soledad Jarquín Edgar, human rights defender and winner of the 2006 National Prize for Journalism in Mexico, denounces the corruption that protects impunity of so many murders of women and journalists in that country. In Europe, she has toured several cities to present the “Justice for Sun” campaign — which she is carrying out together with the civil society organization Consorcio Oaxaca– before the United Nations, the European Parliament and authorities from various countries.

Four years have passed since the femicide of her daughter María del Sol Cruz Jarquín, which occurred in Juchitán de Zaragoza (State of Oaxaca, Mexico) on June 2, 2018, and the murder remains unpunished.

The photojournalist was 27 years old, and was head of the Department of Intercultural Indigenous Communication of the Secretariat of Indigenous Affairs of the government of the State of Oaxaca. Due to her responsibility in public office, she should not participate in any political campaign. However, she was sent by her boss Francisco Montero to support the political campaign of his brother, who wanted to be the municipal president of Juchitán de Zaragoza. There she was murdered along with Pamela Terán, a candidate for municipal trustee and licensed councilor at the time, and Aldelfo Jiménez, the candidate’s driver.

Since then, Soledad Jarquín, like other mothers of femicide victims, has been fighting against impunity, for justice and for full reparation of the damage.

For Soledad Jarquín, those specifically responsible for the crime are its intellectual and material authors. But she also demands responsibilities from the Oaxaca Prosecutor’s Office and from State and Federal political authorities. For this reason, she has denounced corruption and abuse of power by former Oaxaca State Attorney Rubén Vasconcelos Méndez, who favored impunity with his actions. At a political level, she extends the responsabilities to the governor of Oaxaca, Alejandro Murat Hinojosa; the current president of Mexico, Andrés Manuel López Obrador, and other federal officials who neglected the case.

So far this year, 13 journalists have been murdered in Mexico, three of whom are women. GAMAG and its European regional chapter GE support the fight of the Mexican journalist Soledad Jarquín Edgar against impunity of these murders and of all femicides.